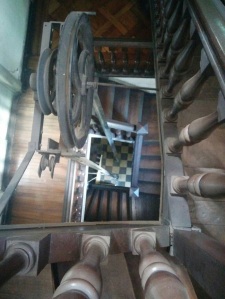 In Pinochet’s Londres 38 detention centre, an estimated two thousand people – mostly leftists in their twenties – were detained and tortured. They were blindfolded the entire time they were there, apart from when they used the toilet. They were burned and disfigured, mutilated. Ninety eight of them, including two pregnant women, were never heard of again.

I walked around Londres 38 the other day and felt nothing. It’s not the first time it’s happened. When I was in school, we went on a trip to Rome. I remember my history teacher at the time saying that you could feel the evil emanating off the Colosseum, but when I got there I didn’t feel anything.

I didn’t feel anything in the S21 centre in Cambodia, where 20,000 people were tortured and killed in the Kyhmer Rouge’s wave of insanity and terror. I didn’t feel it in My Lai, the Vietnamese village preserved as it was when American soldiers gang-raped and mutilated the women who lived there and killed up to 504 unarmed civilians.

And I didn’t feel it in Auschwitz either. I visited the concentration camp on a blisteringly warm day, alongside hundreds of tourists and school groups. Certain sights shocked me – the piles of hair and glasses, for instance – but I stood in the ruins of the gas chambers and I just couldn’t access the emotional place the location demanded of me.

I really liked our tour guide that day. When one visitor suggested that this is what happens when extremism goes unchecked, she replied: “This wasn’t about extremism. Only conformity can explain what happened here.” I thought it was very beautiful and true. But later, just before we broke up, she said that visiting the camp shouldn’t be about feeling sad, that it should instead reconfirm our love of life. She advised us to go out that night, eat well, drink wine, and savour it. I spend much of my life doing precisely those things, so I thought honestly that it might be more appropriate to allow the sadness and horror of that place to sink in, to try to give it some of the recognition it deserved. But honestly I didn’t feel that horror or even that sadness. My feelings about the holocaust, like everyone else’s, were well developed by the time I visited. Being in one of the places where it happened to take place did not add or subtract from them.

This is not some protracted admission that I’m dead inside (I’ll write that later). Show me a film about the holocaust and I’ll start crying pretty much the exact second the director intends me to. But locations themselves don’t seem to have any impact on me.

Our culture presumes that some things are so terrible they soak into the walls of the places where they happen. It is what almost all horror films are based on. And why not? Rooms take on all sorts of aspects for us, positive as well as negative. They are bigger than the sum of their part. My teenage bedroom, where so many of my formative experiences took place, has an almost mystical presence in mind.

A few months ago I watched workers demolish the house next door. One man with a hammer took about an hour to completely destroy a room, breaking down the walls with each swing. And I thought: is that all it takes to destroy a room? For someone, that room he just ended has the same significance as my teenage bedroom. Rooms take on this grand meaning for us, but they are no more resilient than anything made of material. They are as meaningful as school chairs or drain pipes. They are like god: Everything we imagine they contain is in fact an expression of ourselves.

So I walked around Londres 38, in the pebble-stoned, sun-kissed heart of Santiago, and I felt nothing. The rooms could quite easily be converted into a normal house and someone would sit and watch telly in them and eat popcorn and they would be none the wiser that this was a place of despair and injustice and death.

There’s something even more disturbing about that. Evil of that sort is not this great spiritual darkness which taints the physical world in which it is expressed. It is more chaotic and meaningless. It happens and no-one is any the wiser. The place is not haunted. The darkness does not lurk in corridors. It is as if it never happened. I kept on thinking of a Grant Morrison quote, which ran something along the lines of: “Every room can be the worst room in the world.”

It’s that banal. I wish Londres 38 was more upsetting. It would ultimately be reassuring if it was.