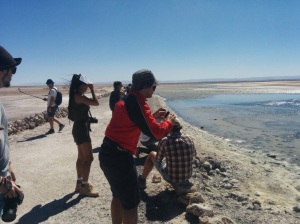 There’s no joy in just looking at things. We’ve all got Google. We know what things look like. Travelling half way around the world just to look at a thing is a completely bizarre and unsatisfying way to spend your time.

But most tourism is spent just looking. The countries people visit do it by blocking off sites. And the people who visit them do it by closing themselves off from the place they’re in.

Stonehenge is a case in point. It has none of its mystery when you stare at it from a distance, with the A303 straining beside it. You get nothing from that experience you wouldn’t get from a Stonehenge calendar in one of those dreadful shops full of incense and dream catchers.

But spend the evening at Stonehenge on summer solstice and it’s another matter entirely. You approach in the dark, late at night. Groups of nasty teenagers sit on the pathway, slightly dangerous. People try to sell you drugs. Families there for the sunrise stare out from their locked cars with unconcealed dismay.

Then the stones suddenly loom up at you from the path – supremely eerie. Suddenly they are not remotely new-agey, but ominous and unknowable. Being able to touch them, being among them, means everything.

This is the case for ruins everywhere, from Tikal to Ankor Wat. Where one can clamber on something, one can connect with it. Where one can only see it, it means little more than watching it on TV. There are obviously concerns about degradation. The best sites, like Tikal, block off some areas but allow interaction with others. I’m not an expert and of course we need them to last for another generation. But if all the next generation can do is stare at it, there is little point in having done so. Let them look at photos and be done with it.

What goes for ruins goes for natural beauty too. I finally arrived at the Atacama desert last weekend and it was a disappointing experience.

I’ve managed to avoid the backpacker trail all trip, mostly by using Air BnB and socialising just with Chileans. It hasn’t been difficult. There have hardly been any backpackers to see. But once you get to San Pedro, the town everything in Atacama is based from, you’re suddenly plugged into a key hub of a backpacker trail you never knew existed. You can’t avoid it. You have to stay in a hostel and arrange tours from there.

The backpackers crowd is the same as it was when I was spending all my time in hostels. The Israelis stick to themselves, the Chinese mostly sit in corners engrossed in technology, French travellers are disliked by almost everyone, Kiwis cling to other Kiwis with a bit too much desperation, Brits and Australians want to be more interesting than they really are. All of them, I think possibly to a man, were either about to take the three day organised trip into Bolivia or had just finished it. They were all doing the exact same route. No one was really in Chile in any meaningful sense. They were just looking at it, as if looking at Stonehenge with the A303 in the distance.

They’re not boring people. I met several I really liked. It was a profound relief to speak English and there were a few drunken nights outside which I enjoyed, because drunken nights outside are one of life’s great pleasures. But there’s something terribly conservative about young people, miles from home, all clinging religiously to a designated, well established course.

Then the tours started and I slumped into a temporary period of catatonic despair. It’s uniquely dispiriting, after a couple of weeks of independent travel, to have to stump up cash, get on a tour bus and be corralled from one place to the next. No matter what you’re seeing – whether it’s wonderful or disappointing – being given a parent in the form of a tour guide makes it impossible to enjoy.

As it happens, the Atacama desert is wonderful. It’s an exercise in God-like watercolours: white volcano tops, blue lagoons, white salt flats and red earth. But at each spot you are simply dropped off and pointed at the pathway. You cannot deviate from the pathway. So your group and a herd of similar ones from other hostels, all brought to the same places at the same times, traipse along, take a photo at the designated spots, and move on. There is no touching or interaction. You are only there to look.

Many people barely seem present at all. They approach something, photograph it, and walk away, without even spending a second to take it in. One imagines they will put these photos on Facebook or, worse, punish their friends with them in person. In either case, they are seeing these things for others’ eyes, eyes which happen not to care.

But even they are not as bad as the selfie takers. There are selfie sticks everywhere and they are getting increasingly long. Many people seemed to only taking selfies.

I’m a bit wary of the bourgeois back-patting involved in criticising selfies. It reminds me a little of people who seem so pleased with themselves for not watching TV. But honestly, it takes an extraordinary degree of self-regard to go to one of the most beautiful places on earth and take a picture of your own face.

There are moments when you can find travelling nirvana, but they are few and far between. We were actually able to clamber over rocks at one salt flat and I managed to get away from the others. When alone, you properly realise what an alien landscape it is. It’s weird enough that everything is salt. But this isn’t even sea salt. It’s volcanic salt. It looks like nothing you’ve ever seen, like a landscape of witches’ teeth. When the wind clatters one piece against another it makes a sound like crystal. Your head pounds from the altitude and sand has filled up your nose, making it constantly feel bunged. The sun is punishing. Standing on a sand crystal promenade, gazing out on a blue lake, with a volcano in front of you, desert around you, and a cruel, relentless wind filling your ears, it’s easy to imagine you’re on an alien planet.

And then there are the tiny moments of chaos you cannot avoid, no matter how regimented your schedule. I came back from a tour one night with a couple of friends and we suddenly found ourselves engulfed in some sort of Virgin Mary procession. At the front, men in costumes danced insanely. At the back a small glass-encased statue of the Virgin was carried aloft. And in front of it, three men holding a bar with ornamental bulls’ heads on it rushed up to observers – including me – and suggestively thrust it at their groin.

Afterwards, we had to make the half hour walk back to the hostel through the desert in perfect darkness and, for a moment, it was all rather startling and ancient. But then we got back and it returned to normal.

I’m trying to get out the desert now. Tonight, I get a flight from Calama, a copper mining town on the outskirts of Atacama, to Santiago, from where I’ll head south.

It’s a horrible place which I can’t wait to leave. I’ve seen two dead cats in less than 24 hours – not a good sign. The people mostly seem half asleep, except for the groups of men who gather on street corners so they can wolf-whistle at women. It’s the only town in Chile I’ve actively disliked. The dust keeps getting behind my ears, the floor of the place I ate at yesterday had a massive spider crawling on it, and I had to keep my eyes out as I walked home at night because half the guys here are sketchy as fuck. It’s not pleasant. But I’m at least forced to be part of it. I can’t just look at it. And anyway, there’s nothing here to take pictures of.